Why Augmented Reality Marketing Will Be Huge in 2015 - Insights
Inspiration

Why Augmented Reality Marketing Will Be Huge in 2015

Augmented reality has yet to earn the respect it deserves. This new technology is frequently seen a little bit gimmicky, rather than being heralded as a means of truly delighting and engaging audiences. But its star is decidedly on the rise, and content marketers should take note: a report from Semico Research predicts that revenues related to AR will hit $600 billion by 2016.

We tapped Matt Szymczyk, CEO of Zugara, and Blippar VP Lisa Hu to talk about what the heck augmented actually is (lest it become nothing more than a buzzword), where it’s going, and how we can (and should) all use it to move the needle on engagement and awareness.

What is augmented reality marketing?

As always, it’s helpful to think in context. Matt Szymczyk offers a simple example: “One of the most common forms of augmented reality used today with video includes the superimposed 10-yard line on NFL broadcasts. The fact that people don’t realize this is AR is why it is so successful. It is seamlessly integrated into the broadcast experience and provides value for the broadcast viewer.”

Augmented reality marketing, then, is a digital element superimposed or added to another environment, be it print, television, or real world. One recent example: McDonald’s fry boxes during the 2014 World Cup. Consumers were able to align their smartphones with a graphic element on the box, triggering an interactive overlay which appeared to jump out at them. Consumers could continue to interact on their phones by flicking a finger to shoot a goal within the display. 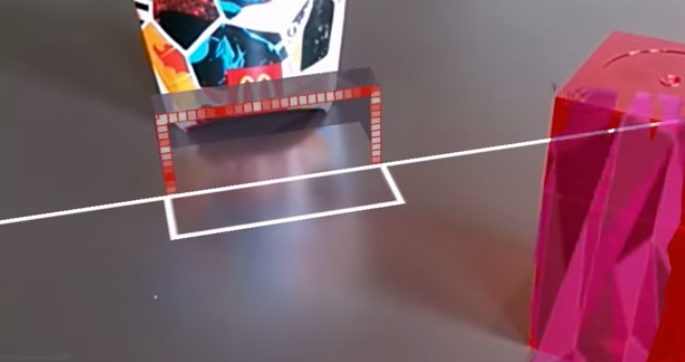 A common misconception about augmented reality marketing is that it’s a replacement for text and images. Not so, says Szymczyk — it’s a supplement and a complement: “AR should be used to enhance content – not replace it. The main challenge is understanding that AR is not a digital strategy but rather a digital tactic that can enhance a campaign across multiple platforms.” Think of AR as a new tool in your arsenal toward engaging your audience.

What can augmented marketing do now? Where is it headed?

According to Blippar’s Lisa Hu, AR has been predicted to be one of the fastest-growing markets globally over the next five years, and Blipper itself has over 50 million global users. Compare that to growing social tools and services like Vine (40 million) and Pinterest (70 million), and it’s clear that augmented is set to become a permanent fixture in the digital marketing landscape.

Like other nascent marketing mediums, augmented reality marketing has developed quickly in the last few years, moving from web to mobile — and next, to wearable. “From 2008-2012, we saw numerous web-based AR experiences that integrated with websites and interactive ads. After 2012, we started to see a shift to mobile-based AR experiences – some of which are utilized to interact with other platforms (i.e. print). In the future we will likely see more out of home display technology and wearable technology leveraging AR,” predicts Szymczyk.

He also thinks AR will become more ubiquitous in everyday life as well as across advertising: “For retail, this could be interactive or virtual mirrors in-store, for mobile devices, this might be more enhanced visualizations for mapping or directions. For advertising itself, I think once the wearable technology segment matures, you’ll likely see AR advertisements and opportunities all around you.” The message? Marketers should be pretty excited about the possibilities that AR brings.

In addition to all this excitement, there’s also the possibility for user-generated AR content. Blippar, for instance, offers a user-friendly platform for brands to create AR experiences. If brands can use it independently, UGC can’t be that far behind.

Like other marketing tactics, AR can increase ROI through brand awareness and increased engagement. Brands who get on board with the technology sooner rather than later stand a good chance of benefiting the most from getting ahead of the curve. Since AR is so new, the awe factor is still fresh with consumers, and just in time: “We are now entering a second generation of AR with more powerful mobile devices, 3D mobile cameras, and the second generation of Kinect. These will all provide for more advanced AR experiences that were limited in the past due to previous generation hardware,” says Szymczyk.

AR is also a lot of fun for marketers and consumers, which means increased ability to offer authentic experiences. Hu says that through augmented reality, “Brands are able to deliver more value to their audiences and create much more impactful interactions, whether they are delivering something of educational, entertainment or functional value.”

Hu also explains that in terms of straight comparisons, Blippar campaigns have an average dwell time of 75 seconds — this is 2.5 times the average of radio or TV ads. She explains why this is the case: “AR campaigns require active engagement, meaning consumers choose to trigger an AR experience; versus passive forms of traditional advertising that don’t require active audience engagement.” As with everything else, authenticity and a true buy-in from consumers will always win the content marketing day.

At the end of the day, it’s just marketing — and you know how to do that.

When you’re dipping your toe into the pool of augmented reality, it’s easy to get caught up in the new technology without taking a step back to consider what principles all good marketing shares regardless of medium. Szymczyk explains: “Like any emerging technology, the key to AR’s effectiveness is to provide a value proposition for the consumer. Too often AR has been used as a gimmick that doesn’t provide a meaningful experience for the consumer. The basic principle of ‘good’ AR is one that follows best practices with User Experience and provides a call to action for the consumer (for engagement or conversion).” There you have it: be authentic, and the people will respond.

What do you think of augmented reality? Tell us on Twitter.