Runways may look all glitz and glamour, but times are still tough for many fashion brands and the need to stand out is greater than ever. As the label who courted controversy with their early FCUK campaigns, attracting attention has never been difficult for High Street brand French Connection. Attracting customers, however, well, that’s a different story.

Sales have steadily dropped over the past decade, with 10 store locations closing earlier this year despite repeated attempts to keep interests peaked. But, with a reported 8.1% increase in e-commerce sales, things seem to be looking up. 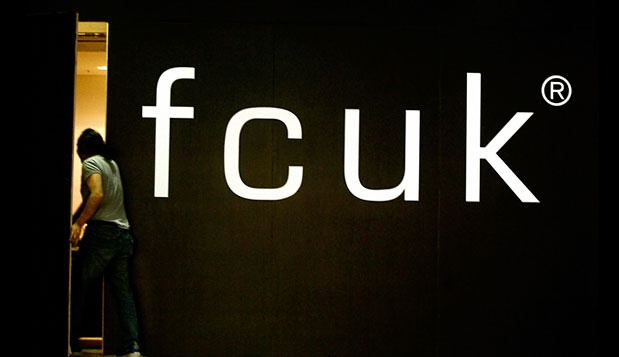 “Cool as fcuk” t-shirts may have made news in the 90’s, but now elicit a smirk at best – not enough of a reaction to really drive purchasing decisions. The brand’s never been afraid to push boundaries and try new things, however, like their now defunct YouTube boutique or a controversial foray into Chatroulette that encouraged men to pick up women in hopes of winning a shopping voucher. Yikes.

That may have been a stint of male-oriented marketing gone mad, but sometimes risks do reap great rewards – and French Connection is one to dish it out and roll with the punches. In rebuilding its reputation since those adolescent years, the fashion line has taken some great strides to reinstate that unique mix of cool irreverence in their branding.

From Sketch to Store 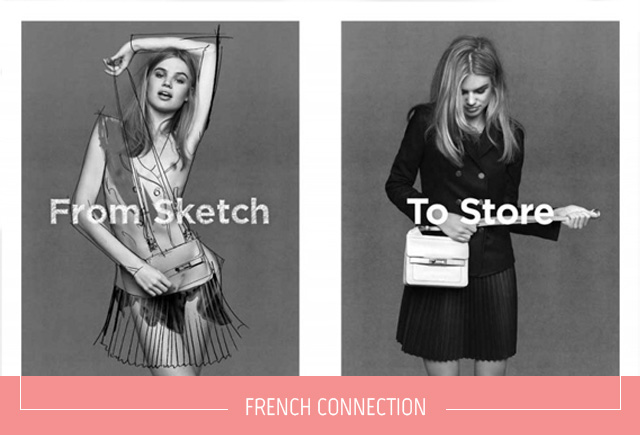 Nothing grabs the eye like showing a little a skin – or in this case, a lot of it. And while Chatroulette is a great place to find people in their birthday suits, last year’s “From Sketch to Store” campaign found a way to do nudity with style.

Fashion photographer and regular French Connection collaborator John Rankin Waddell created a series of tasteful yet edgy images featuring his models nude and alternately clothed in the brand’s Autumn/Winter 2013 collection. Illustrator Jo Bird then provided sketches to overlay onto the naked images, creating an effect that depicted the true artistry that goes into designing each item of clothing.

The fun yet mature campaign was a hit with fashionistas and critics alike, following the elegant evolution started by 2010’s “This is Man/This is Woman” aesthetic. Some got their knickers in a twist, but as they say: all press is good press! Plus, a campaign that lends itself to terrifically saucy GIFs? That makes for an instant favorite.

Everyday shoppers may not be willing to strip down to their skivvies, but we do know that they like to be in on the action. FCUK gave them just that chance for last year’s Spring/Summer 2013 collection with their “Make a Scene” campaign, which allowed fans to “direct” their own video ads in hopes of winning a trip to Sydney along with some cash for a shopping spree. 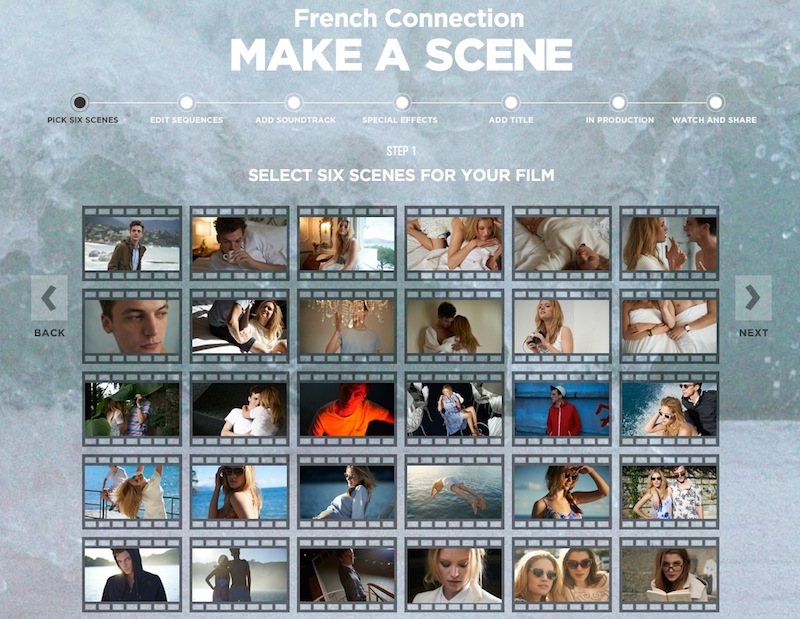 Users were provided with a vast but easy-to-use selection of pre-filmed clips, copyright-free music, and other media to mix and match in creating their own unique advertisements. Instagram-like filters and select genres like romance or noir were available for an even more personalized touch and total creative control.

Trusting your audience with that level of responsibility is something that people really respond to. According to Jennifer Roebuck, the brand’s Multichannel Marketing Director, the project reached about 1.3 million fans – quite a lot for a label like FCUK. It just goes to show how thirsty people are for fun, engaging projects like this one. 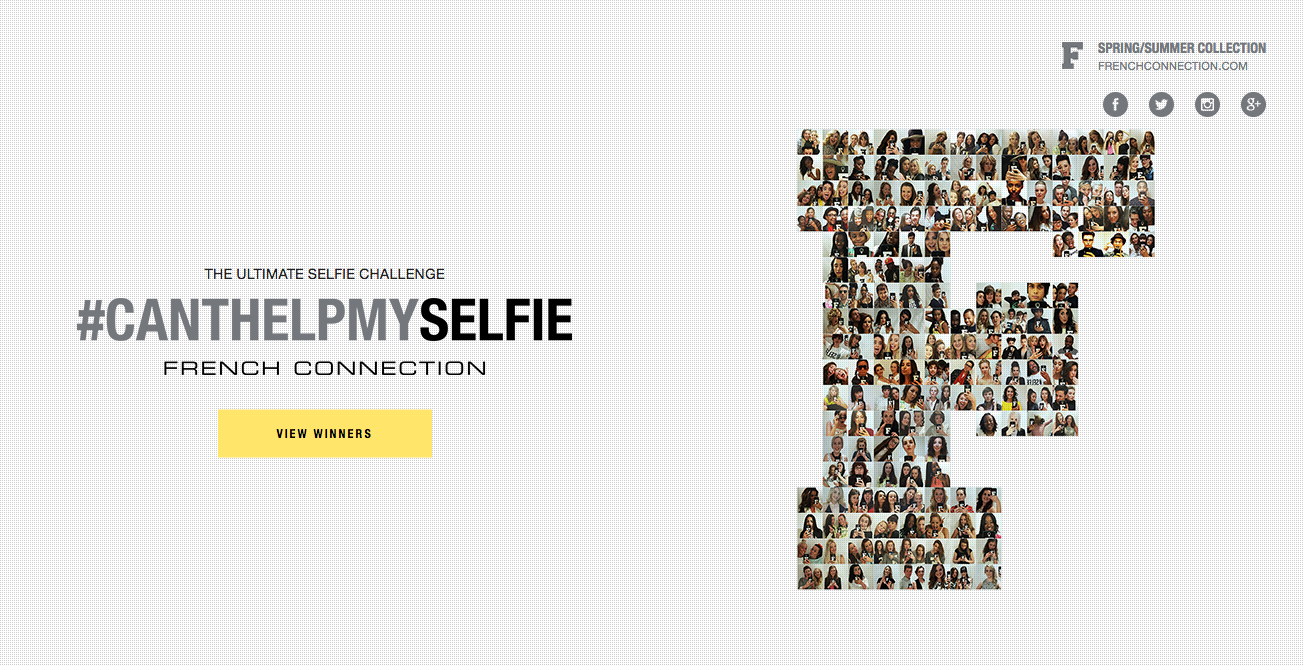 Letting your fans’ creativity run wild is great, but sometimes all it takes to get audiences engaged is a good old selfie. With over 17 million shared in the UK every week, brands are eager to get in on the action.

With their “Can’t Help My Selfie” campaign, French Connection took the shopper selfie to new heights with “the ultimate selfie challenge.” Interactive selfie booths were set up across five UK locations, which then projected shoppers’ photos into store windows and social media networks, creating a friendly and fashionable competition to track down the nation’s most stylish selfie.

Not only did participants get their very own five minutes of fame, they ended up spending more time interacting with the brand, browsing for the perfect outfit, and trying on various pieces in-store. Nothing raises awareness like media gone viral, and in this case, it’s the selfies that aim at sales. 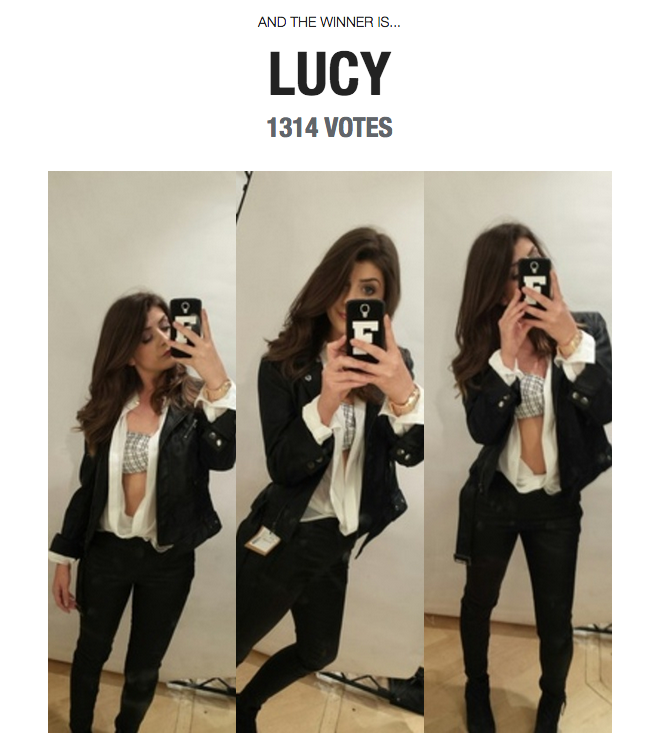 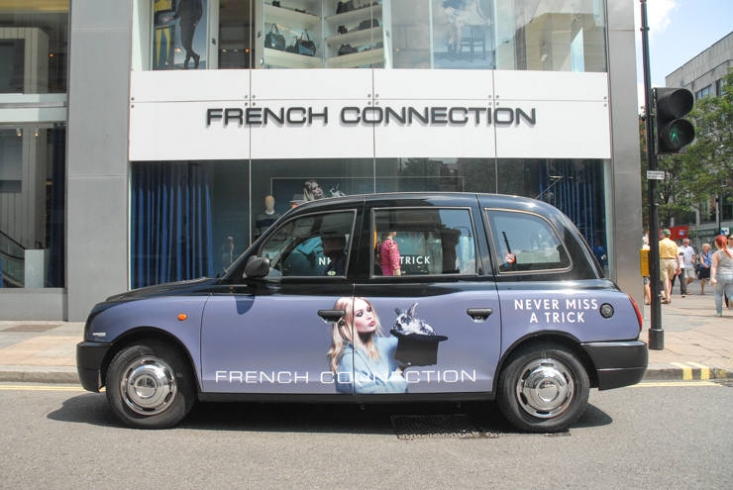 Part of FCUK’s latest campaign for this season’s collection rolls in on four wheels in the form of a taxicab. A literal mobile advert and competition combined, the stylish ride will be appearing around London until the end of this month, so keep your eyes peeled until then and have your phone on hand (as if you wouldn’t). Those lucky enough to spot the car should snap up a photo as fast as they can and tweet it at the brand, along with the hashtag #nevermissatrick for the chance to win a wardrobe worth £1,000. Not too shabby.