What Would Ted Baker Do? - Insights
Inspiration

What Would Ted Baker Do?

Long ago, Ted Baker proclaimed itself the “No Ordinary Designer Label,” and that just so happens to be true. Since its 1988 start as a menswear shop in Glasgow, Ted Baker has grown into a global fashion brand, with 340 stores and concessions around the world and collections now spanning womens, kidswear, shoes, accessories, interiors and more.  In 1999, it was among the first fashion brands to launch an online store, and reports have consistently shown positive growth and expansion.

All this, without ever employing a traditional advertising campaign.

Since its start, Ted Baker has relied on word of mouth and cleverly unconventional marketing strategies to keep things exciting and engaging. Ted Baker’s strong brand identity and personality, which so embodies the British point of view and tongue-in-cheek sense of humor, have been key to its success. No surprise, then, that the rise of social media fit perfectly with its ethos.

Each season presents a fresh opportunity for Brand Communication Director Craig Smith and his team to get even more creative with a campaign that correlates to each new collection. Smith’s take? “We are always looking at innovative ways to support our brand and engage with our audience…[and] are genuinely excited to witness how new technology can help us to connect with a live audience in new ways.” Platforms like Facebook, Twitter and Instagram have made it more easy than ever to fully engage with fans; by staying true to its vision and steadfastly focused on its original priorities – design, quality, attention to detail and a quirky sense of humor – Ted Baker has succeeded in creating an online space where everyone is welcome and involved.

Let’s take a look at how the brand’s been living up to that statement.

In 2010, the brand produced its first major social media promotion: “the world’s first Twitter operated styling studio.” Eight fashion bloggers were invited to spend a couple of hours (15 minutes each!) creating looks out of 450 separates from Ted’s winter line, all of which was streamed live on Twitter and the brand’s own website. Here’s where it gets interesting – at the end, viewers were given the time and opportunity to tweak the looks by tweeting suggestions to @ted_baker with the hashtag #TakeOnTed.

The stunt not only served to promote the brand’s products and new US e-commerce site, but also succeeded in amping up its Twitter fan base. Before the now-famous styling session, Ted Baker had a mere 600 followers on the platform. That day, thousands of tweets poured in, all of them full of excitement at this social-media-meets-fashion milestone and the chance to be a part of it all.

Just over three years later, the brand’s Twitter followers number up to over 45,000 people. The space is used to share content, promote Ted’s personality, and – most importantly – to interact with the company’s fans and customers.  Every inquiry and complaint is answered individually, ensuring its audience feels heard. And that’s an important feeling.

After the smash success of Ted Baker’s Twitter experiment, the brand decided to go full steam ahead, gradually building up to the creation of 4-6 social media promotional campaigns per year. 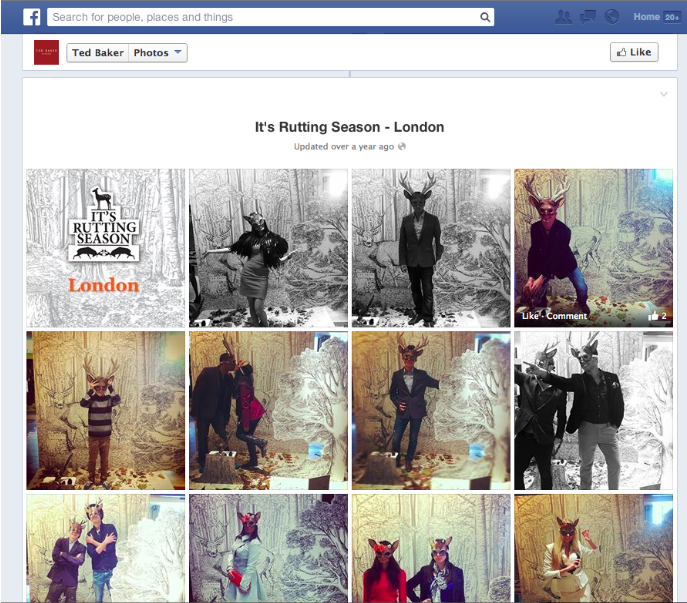 For its Fall/Winter 2011 “Worn to be Wild” collection, fans were encouraged to play a little dress-up during their shopping sprees with a campaign titled, “It’s Rutting Season.” On set days throughout three separate UK locations, customers tried on pieces from the new seasonal selection while donning deer masks and posing in front of a woodland backdrop for their own personal photo shoots, led by each city’s favourite fashion blogger. The images were then filtered on Instagram, which was still in its early days, and posted to Facebook, where users tagged themselves and sought out likes from friends in hopes of winning £500 to spend on the brand.

Efforts like this provide for an extraordinary boost in online activity and audience engagement. Ted’s Drawing Room campaign similarly intersected Facebook and Instagram. Photos and selfies of Ted Baker-clad fans were transformed into original artwork by 11 top illustrators, a project that led to a “75% increase in reach on Facebook, and a 1000% rise in Twitter mentions.” 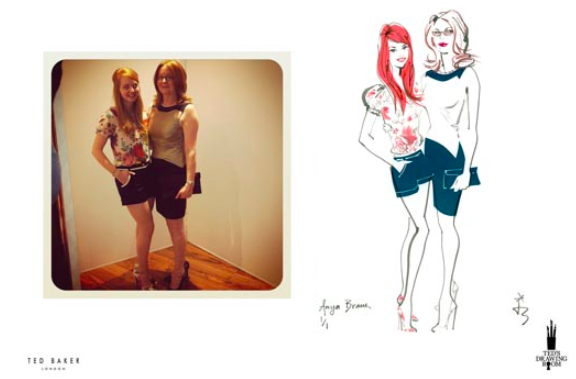 Live footage of the artists at work in the London “Tedquarters” was broadcast on Facebook and back into stores to an audience of over 2000 viewers who tuned in for an average of 26 minutes each. Smith reflected on the campaign, saying that it “in some ways sums up why, as a brand, we’re developing so strongly – attention to detail and putting the customer first. The simple things done well.” Now that’s engagement.

A more recent campaign, Ted Baker Lines, was launched to promote the brand’s Spring/Summer 2013 collection, Finishing School. Fans were prompted with fun, quirky phrases reminiscent of the brand (“I am the exception, never the rule.”) and encouraged to recreate them on their own. The response? An engaged audience that sent in hundreds of entries on a daily basis.

Most impressive has been Ted Baker’s ability to link brick-and-mortar with online marketing, visualizing digital activity in physical space. These campaigns were designed to connect a fan’s in-store experience with his or her digital world, thus enriching both. A prime example is this past Christmas’s Merry Kissmas concept, where shoppers got in the spirit and snapped selfies, which were then displayed in store windows throughout the holiday season – not to mention all over Twitter and Instagram with the hashtag #KissTed. 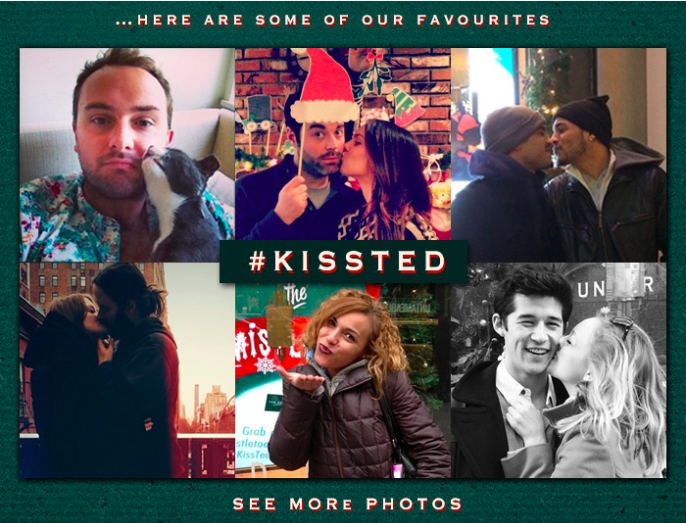 Instead of pouring funds into extensive and expensive ad campaigns, the brand has succeeded at thinking outside the box, and in turn, came up with some seriously fun and engaging marketing techniques. Ted Baker has found its niche with creative social media campaigns that provide a call-to-action for its audience to come into the spotlight, get artistic and create.