It’s been a rough month for the Equinox brand, and it continues to be challenging.

Just a few weeks ago, the brand’s owner Steve Ross held a widely-covered fundraiser for President Trump, which did not align with Equinox’s long-standing marketing campaigns supporting the LGBTQ community.

The protest by Equinox members on social media and the press appeared to have caught the organization off guard. Members flocked to social media to announce the cancelation of their memberships. Meanwhile, other gyms took the opportunity to poke fun at Equinox. New York Sports Club posted on Instagram: 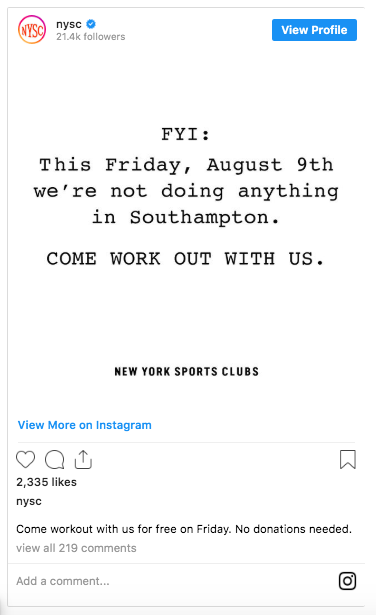 Following the fundraiser, the Equinox team formulated a plan to combat the crisis and stated that it was donating $1 million to LGTBQ causes.

However, the move continued the crisis by using a fundraising action to entice members to stay with Equinox. In order to decide where the money goes, according to reports, Equinox is “pitting five charities against each other to win a share of a million dollars, and you can only vote if you don’t cancel your membership.”

What can be learned from Equinox’s ongoing PR situation? Here are three lessons:

For years, Equinox positioned itself as a champion of inclusivity and diversity. On its website, it states “diversity celebrated” as its first core value. With its owner’s public display of affection for the president, however, the brand appears to be hypocritical at best.

It takes years to build a brand and only seconds to destroy it.

While hindsight is 20/20, Equinox might have been better served by going with a completely different positioning in its marketing campaigns. For example, it could have focused 100% on fitness and wellness. Moving forward, marketers will need to check where their owners stand on issues before proceeding with cause-oriented campaigns.

The day the crisis broke, Equinox released a response that did nothing to calm the storm. The statement positioned Ross as a “passive investor” and “not involved in the management of the business” in an attempt to distance the brand. Many were outraged by the statement because it simply was not believable.

This moment shows how important it is to test your message before you release it publicly. One solution is to always have a focus group ready to go so you can quickly gather feedback. Equinox could have included members as well as employees. A quick session with such a group would have immediately demonstrated that the statement was not going to be effective in calming the controversy.

Within the statement, there was no admission of wrongdoing, which was necessary, especially considering Equinox built its brand on the back of LGBTQ+ causes.

What members would want to hear is: “We believe it’s wrong to build our brand supporting LGBTQ causes while our owner is holding a fundraiser in direct conflict with our core beliefs. We are in active discussions internally to correct what has happened and will seek your guidance in the best way to rectify this unacceptable situation.”

Admitting you’re wrong is challenging, but that’s the only way to move forward, especially in Equinox’s case.

It takes years to build a brand and only seconds to destroy it. Can Equinox turn its ship around? By actively engaging with its membership and collaboratively coming up with a plan to move forward, there is hope. And for all marketers, there are lessons to be learned from Equinox’s experience.

This article was written by Mark Pasetsky from Adweek and was legally licensed through the NewsCred publisher network. Please direct all licensing questions to legal@newscred.com.

Industry Leaders 5 Marketing Challenges for 2020 According to Survey Research

Industry Leaders Top Marketing Initiatives for 2020 According to Marketers