The Power of Nostalgia: Why All Your Design Friends Are Talking About "Stranger Things" - Insights
Inspiration

The Power of Nostalgia: Why All Your Design Friends Are Talking About “Stranger Things”

The Netflix original series “Stranger Things” has everyone talking: Finally, new sci-fi. Even better? New 80s throwback sci-fi. There’s no doubt that “Stranger Things” is a tribute to a genre and decade that’s so special to many of us in our twenties and thirties today. The mysterious, supernatural elements, retro design, and music transport us back to our childhoods when things were…stranger. More innocent. I know most of my friends watched the entire series in a weekend – one coworker even finished it in one sitting.

In particular, I found myself captivated by the “Stranger Things” opening.

Flashy, over-stylized intros have become the trend and the “Stranger Things” opening reminded me that simple is good. The entire 50 second intro is just an eerie, slow pan of the title with the names of cast members fading in and out. As soon as I saw the opening I knew I had to create something similar, so I decided to animate the NewsCred logo to honor the 80s.

But First, Why Are We Drawn to Nostalgia?

I couldn’t help but wonder, what about the design of the “Stranger Things” opening places it so perfectly in the 80s that we’re instantly able to recognize it as a blast from the past? And what’s that feeling that comes along with it?

Although the popularity of “Stranger Things” is a testament to the show itself, another factor is at play: Nostalgia. When the term “nostalgia” was first introduced in the 17th century, it had a negative connotation – stemming from the Greek words for “home” and “pain.” At the time, psychologists felt that nostalgia was a mental condition causing someone to be stuck in the past. It wasn’t until the turn of this century that quite the opposite was proven by Constantine Sedikides, who suggested that the feeling of nostalgia is a vital part of mental health.

When we look back at our childhood, we’re remembering a time when we had it easy, with less concerns and responsibilities. This leaves us with a feeling of being carefree. It’s for this reason that we experience such a connection to shows and movies that take us back to that time period.

So what makes a recent decade such a big hit with audiences? A demand for nostalgia from creators and consumers alike may be the answer. We all want to be transported back.

Another idea is that since technology has started to interfere more and more with our daily lives, we now look back on the 80s as a simpler time, when content was easier to digest and trends were easier to follow. It’s funny that the goal in the 80s was to go digital, but now that it’s a part of our everyday culture, many people long for fewer distractions.

The analog-meets-digital process is what truly defines the design aesthetic of the 80s and is how Imaginary Forces, the design house behind the opening of “Stranger Things,” was able to capture the decade so perfectly. In order to replicate that analog feel, Imaginary Forces creative director Michelle Dougherty met with Dan Perri, creator of the iconic, text-scrolling opening for “Star Wars.”

Although their final product was digital, the Imaginary Forces crew was able to use techniques similar to Perri’s to mimic analog. They created physical transparencies of the titles, then filmed them backlit with a flashlight. They then replicated this footage, with all its perfect imperfections, using digital.

The style of the “Stranger Things” intro pays homage to Richard Greenberg, creator of many classic film openings (“Superman,” “Alien,” and “The Untouchables,” to name a few) and a name that the show’s creators, Matt and Ross Duffer, gave to Imaginary Forces for inspiration. The tight crop of the text, the fonts Benguiat and Avant Garde (used in Stephen King paperback covers, “Star Trek,” and “Twin Peaks”), and the backlit text are all references to classic 80s title sequences. (Think “Blade Runner,” “The Thing,” and “Ladyhawke.”)

How I Sent the NewsCred Logo Back to the 80s

Seeing the success of the Imaginary Forces’ “Stranger Things” opening inspired me to try my own hand at bringing that 80s feel to our NewsCred logo. I decided I would create an animation using similar techniques. Here’s how:

I started with a clean version of the logo, broken apart by color. The mark is made up of overlapping colors and transparencies, but I really wanted to “feel” the glow of each shape bleeding into the other so it was important to have them separate. I applied a glow to each of the parts individually. Still, this looked too clean and too digital.

I then used the “3D” option in Adobe After Effects to give each layer some dimension. This means each layer won’t just have an X and Y coordinate, but also a Z coordinate, determining not only how far up/down or left/right it will live, but also how near/far. 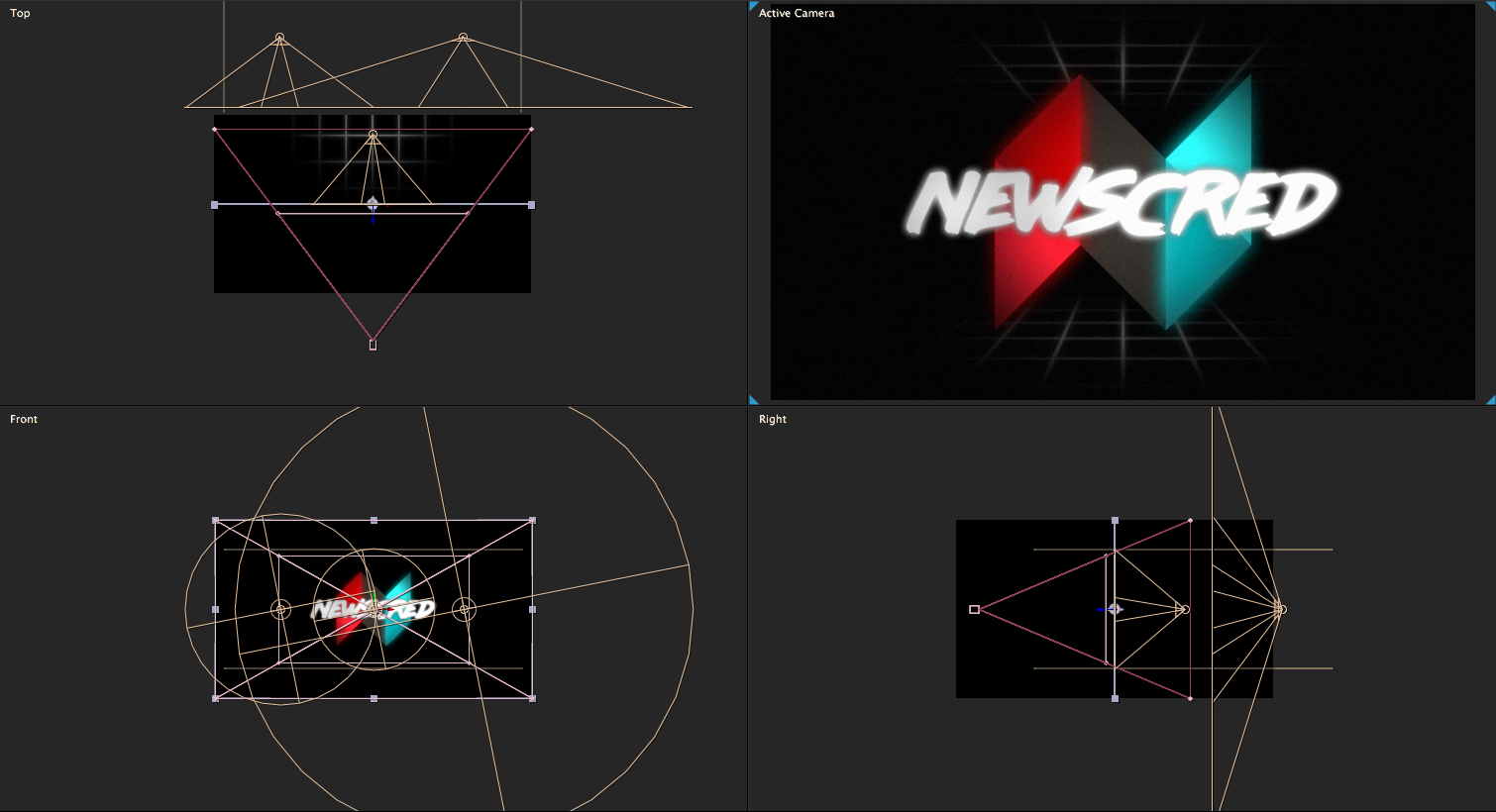 In this digital, 3D environment I was also able to specify which camera models I’d like to use (in this case, a slightly modified 24mm) as well as add lighting and determine how it interacts with each layer. I positioned spotlights to allow light to shine through each layer and shape of the mark. I varied the intensity of the spotlights throughout the animation to give it a more “natural” feel, with some areas darkening and others being blown out.

Even with the more natural backlighting, the result was still too crisp. I needed to scale back on the quality. To do this I added two “adjustment layers” – layers that will affect everything beneath them. I added a “noise” effect to one of these layers and a “grain” effect to the other one. This gave the final rendering more of a film feel.

Now that I had the aesthetics down, I wanted to bring the logo to life. I chose “Lazer84,” a retro brush font created by Juan Hodgson to spell out “NewsCred” across the mark. After scaling and positioning the font I split it apart letter by letter. I applied the same glow effects and light shining through as I did with each of the mark’s shapes. I also gave each individual character a shadow so they would really stand out in front of the mark.

Rather than having the text fade on, I chose to recreate something that was popular in the 80s, a write-on. I manually went through and using the “Paint” tool and “Write On” setting drew out the brush strokes of each letter, editing out any overlap with the “Eraser.” I adjusted the speed of this until it appeared smooth.

I then set up four more cameras in this 3D space that mirrored the tight close-up pans of the letterforms in the “Stranger Things” intro. I wanted to add a little visual interest to the black surrounding the mark, so I created yet another animation of lights panning and varying in intensity along a grid. I arranged this grid in the 3D space on the top and bottom of the mark. This let the focal point of the mark be framed by grids and added an extra boost of 80s.

With all the cameras and animation playing through, I wanted to introduce another layer of distressing. To accomplish this I added “Fractal Noise” and adjusted the contrast so that random white flecks would appear and give the rendering the appearance of scratches on film.

The only thing missing? Music. I was discussing my animation with fellow NewsCred designer, Jeremy Ford, who mentioned he worked on a beat with some pretty serious synth and a dark sound to it. After listening to it I knew it would fit exactly with what I was trying to do. I cut it down and synced it up with the animation so that the grid was now moving along with a beat. The song and animation build simultaneously and I think it was the perfect finishing touch.

I’m pretty proud of the result. Although inspired by “Stranger Things,” this animation grew into my own take on the 80s. It was exciting to bring to life a decade that means so much to me and to make it relevant to the work I’m doing today.

Dan Rudy is a designer at NewsCred.