How to Use Screenwriting Techniques for Content Marketing
Strategy

We often refer to content marketing as storytelling, but Clay Hausmann, Chief Marketing Officer of Aktana and Founder and Principal of marketing consultancy treatment., takes that concept one step further.

It’s his contention that if you apply the principles of screenwriting to your brand strategy, you can successfully capture your audience’s attention and devotion. He should know because that’s what he does.

Though he’s been a career marketer, Hausmann spent several years learning and practicing the art of screenwriting. While he didn’t end up leaving marketing for Hollywood, he’s managed to merge the two worlds – with a unique perspective on how marketers can tell stories.

In marketing circles, we tend to rely on things like flow charts, diagrams, and pyramids. But according to Hausmann, that’s no way to tell a story.

“You wouldn’t summarize a trip by saying, I’d like to show you a couple of the key message points and summarize those for you in a beautiful pyramid and diagram,” he says.

To close the time and efficiency gap between the typical (and boring) marketing strategy language and creative execution, bringing a screenwriters’ toolkit into the process can make a world of difference, according to Hausmann.

At #ThinkContent Summit 2017, he provided step-by-step instructions for “brand scripting,” which he defines as identifying a company’s core brand narrative and building the story structure that aligns all executional efforts.

Take a look at Hausmann’s script for content marketing success, illustrated through the brand Beats by Dre. 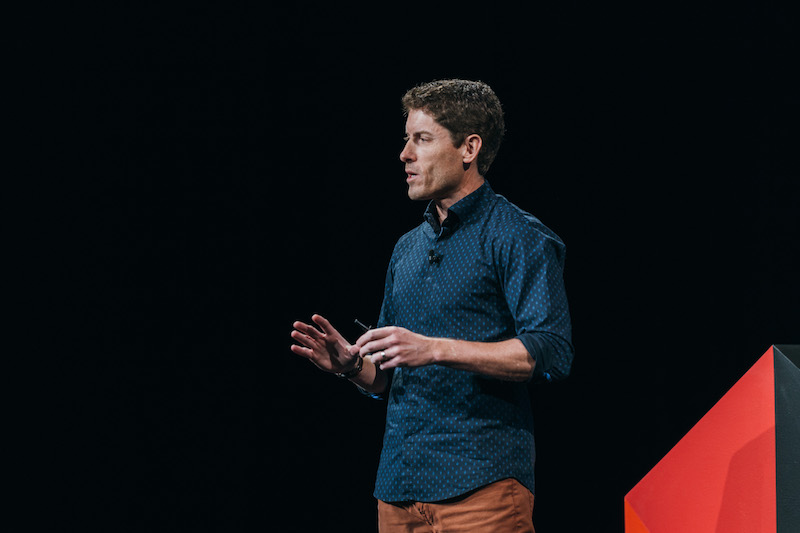 Clay Hausmann, Chief Marketing Officer of Aktana, and Founder and Principal of treatment., at #ThinkContent 2017

“If you are a film school student, you know that moment in first 15 minutes of every film that disrupts the world of the characters. It provides that narrative thrust,” says Hausmann.

“Take Star Wars,” he continues. “When you meet Luke Skywalker, he’s a farm boy doing moisture farming – whatever that is – and gets a couple of droids to help. It seems like it’s not going to be a very captivating film until one of the the droids projects a hologram of a princess that needs help. Then off we go.”

Now, apply that to your business goals. Whether it’s a product launch, or a marketing campaign, the inciting incident is most effective when it’s rooted in a customer issue that you’re going to solve.

For a startup, it is usually the founding story.

The founding story of Beats, as legend has it, is that when Dr. Dre was approached to do a line of sneakers, he spoke with a friend who said, “F*** sneakers, let’s make speakers.”

That pivotal moment captured what would become the brand’s rebellious tone and disruptive nature. It became the company’s rallying cry in the early days that helped move it into the next phase.

Marketers are quite familiar with mission statements, but Hausmann says they are often the most misused, self-absorbed, and over-engineered business tool. Instead, he says, you can keep it much more simple.

He cites Robert McKee’s screenwriting guidebook “Story,” which describes “the controlling idea” as how and why life undergoes change from one condition of existence at the beginning of a story, to another at the end.

So think about your brand through that lens: What is the message you want to convey?

The controlling idea for a brand is essentially how and why a customer’s life undergoes positive change from before they had your product to after.

“You need that north star to remind you what you’re ultimately trying to accomplish,” says Hausmann.

Beats is able to sum up its controlling idea in one sentence: “Music is best enjoyed when it arrives exactly as the artist intended.”

That one statement talks about the benefit for the consumer, and gives a peek at what Beats can do uniquely that other companies can’t.

In films, the audience most connects with the characters. That’s why Hausmann says it’s vital to make purposeful choices in order to stand out.

Hausmann uses the example of how the makers of “Die Hard” shook up the typical 80s action movie genre. Rather than casting your average muscle-bound hero, the filmmakers went with Bruce Wills, an everyman. Alan Rickman played the villain so well that he got almost equal screen time as Willis – a rarity for bad guys. Plus, the film cast Bonnie Bedelia as a bold, independent female lead – also uncommon, at the time – and cleverly used Christmas as a juxtaposition to all the violence.

All those choices contributed to the film’s success, according to Hausmann.

Beats made a few key decisions regarding what its characteristics would be. First, they made the choice to invest in design in a way no one else in the industry had before. Sony and Bose had great sound quality, for instance, but they were unattractive.

“Beats wanted to stand out on the shelf and jump out at the consumer,” says Hausmann.

Next, the “character” of Dr. Dre plays an integral part in branding Beats. He brings the artist’s perspective regarding how music is supposed to be heard.

Another characteristic was choosing to change the sound signature – they turned up the bass since it’s complimentary to Dr. Dre’s style of music, and the average listener equates more bass with better sound, explains Hausmann.

Finally, they targeted the youth market despite the higher price points of their products. Their goal was to create something trendy that young people would be willing to save their money for, along the lines of Air Jordan sneakers.

Putting It All Together 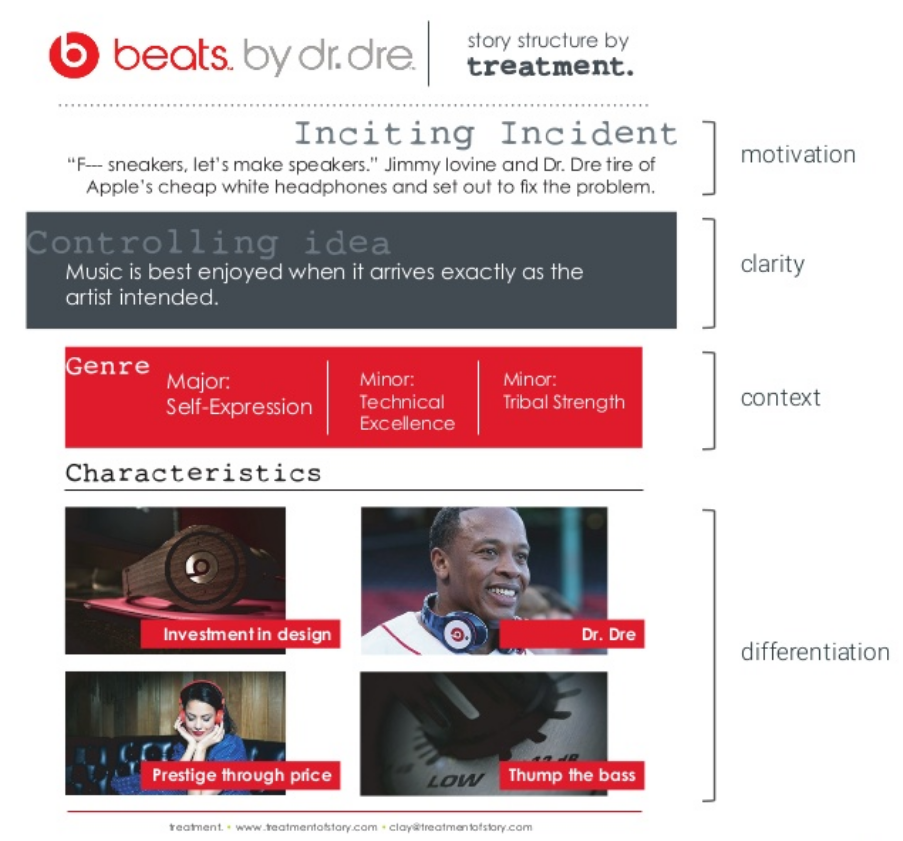 Once Beats set its story structure, it influenced the marketing team’s next moves.

“If I run marketing for Beats, I know I will put aside a lot of money for package design, have content created around our design process. I’ll tell PR don’t worry about audio journals because they don’t drive the trends. And I’ll do a ton of youth marketing,” says Hausmann.

The beauty of using the screenwriter’s toolbox is that it applies to any type of content marketing campaign in any industry. Here’s how you can utilize it in your next project:

Check out Hausmann’s full chat here, and don’t miss other insights from #ThinkContent.