Successful social media brands have a tone of voice and personality that makes them stand out. Nowhere is this more important than on Twitter, where the average shelf life of a tweet is much shorter than on other platforms. Given that the user journey on Twitter usually begins with the newsfeed, and given that the newsfeed is populated with dozens and dozens of real-time content pieces from brands, publishers, and individuals, breaking through that competition is tough.

One way to get through the noise? Be funny. Be really funny.

When it comes to being funny on Twitter, frozen pizza brand DiGiorno offers content markets a veritable master class. While competitors like Tombstone Pizza and Freschetta and have 1k and 11k followers, DiGiorno throws them into the oven with a highly engaged 80k.

Here’s how they’re doing it:

Being culturally relevant is something lots of brands strive to do on Twitter, where hashtags organize platform-wide conversations. By referencing #FiftyShadesTrailer, DiGiorno isn’t just being incongruously funny, it’s getting in on a conversation with a trending hashtag (and grabbing over 80 retweets and 129 favorites in the process).

2. Cultivate a consistent tone of voice based in humor. 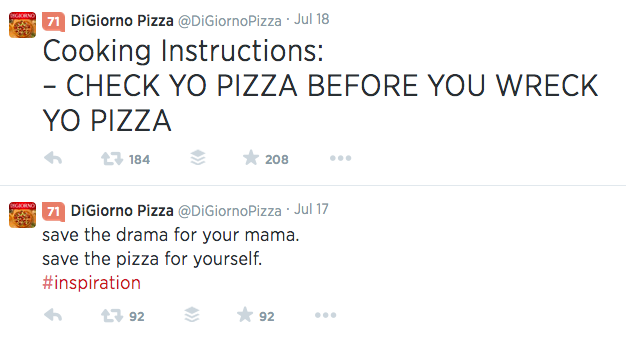 Oversized personality is the hallmark of lots of great comedians — think of Will Ferrell, or Amy Schumer. Just as these personalities cultivate their own brand of humorous identities, so too must brands who want to be funny. DiGiorno does this well by consistently using a somewhat belligerent, slightly sloppy, pun-filled personal tone. This extends right down to the letter level, where there are TONS OF CAPITALS WHERE THERE MIGHT NOT BE or no capitals or punctuation at all where you might expect it. If it makes sense for your brand – commit to the character.

3. Get in on live tweeting…and nailing audience participation.

When ABC Family aired all of the Harry Potter movies in what was called #PotterheadWeekend on Twitter, DiGiorno maximized its funniness, and its number of impressions, by setting up shop in front of the TV and live tweeting the marathon with the hashtag. There’s always strategy underlying the silliness, and two things that DiGiorno did well were aligning with overall marketing efforts (calling out their commercial in a tweet) and retweeting humorous tweets from fans to keep them interacting mindfully with the account.​ 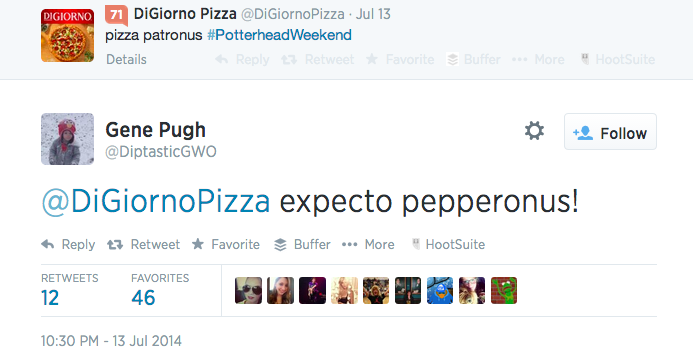 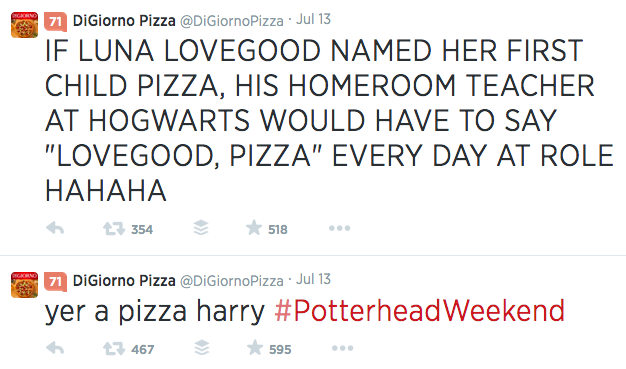 DiGiorno’s sense of humor on Twitter is a huge differentiating factor in a market with a lot of competing products. Spontaneity and laughs go a long way to growing an audience, and staying on their mind when they’re making purchasing decisions.​