People engaged with U.S. brand content 52% more often in the first quarter of this year than they did a year ago, and their engagement is growing faster even than the rate at which brands are pumping content out, according to data on 100,000 brands from social-analytics firm Sharablee.

In all, people liked, shared, favorited or commented on brand content across Facebook, Instagram and Twitter nearly 13 billion times in the first quarter alone, and it was people’s engagement rates rather than brands putting out more content that drove most of that big increase.

The data answers a key question that Sharablee founder and CEO Tania Yuki keeps getting from marketers: “Has this thing leveled off? Is social starting to pull back?”

Sharablee clients include Unilever, which made the startup one of its Foundry50 honorees pitching to agencies and marketers during the Lions Innovation portion of the International Festival of Creativity in Cannes this week. It takes a different tack than most social analytics firms, focusing not on spontaneous consumer social-media posts about brands but rather on brand posts and how consumers react to that content. As such, it focuses squarely on impact brands are getting from the social-media content they fund.

Ms. Yuki previously helped found ComScore’s Video Metrix for online video, and that background is particularly germane to her new business, because she sees video posts driving the vast majority of recent growth in engagement with branded content. Overall, engagement with brand videos grew 186% last quarter more than three times faster than the overall increase though video still only accounted for 10% of overall engagement with brand content.

A mere 25 brands out of the 100,000 tracked mainly sports and media accounted for 12% of consumer engagement with brands, though five fashion retailers also made that list Victoria’s Secret, Brandy Melville, Aeropostale, Urban Outfitters and Forever 21 along with cosmetics brand Anastasia Beverly Hills. National Geographic, with the ever-popular “Jaguar Attacks Crocodile” video, led all brands, but brands like Aeropostale, with a video about its Valentine’s Day promotion, did well too. 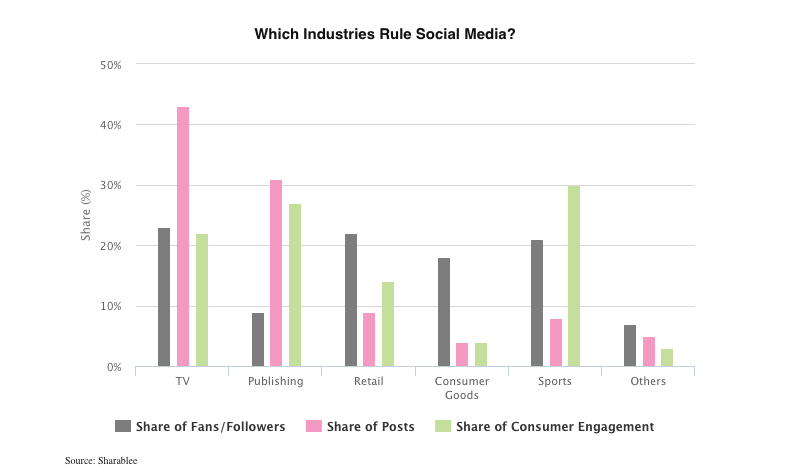 “There’s a divide among marketers on whether the right currency metric for social media ought to be engagement or impressions,” Ms. Yuki said. While Sharablee started by measuring engagement, it’s moving toward tracking impressions on a brand and industry basis as well.

Ms. Yuki said “passion brands” in TV, publishing or sports tend to focus more on engagement, while more utilitarian brands focus more on reach to evaluate social media the same way they do other media.

“It would be missing a lot of the juice of social to only think about reach and impressions,” she said. “But I do think social will continue to struggle to get a real seat at the table without measuring impressions.”

Charts by Chen Wu. From AdAge.com, 06-22-2015, copyright Crain Communications Inc. 2013. This article was written by jneff@adage.com (Jack Neff) from Ad Age and was legally licensed through the NewsCred publisher network.