After realizing that visuals drive the highest engagement on social media, more and more marketers and businesses are focusing on creating quality visual content. According to Social Media Examiner’s, 2015 Social Media Marketing Industry Report, 71% of marketers use visual assets in their social media marketing. The report also found that 73% of marketers plan to use more images in 2015.

Do you know what this means?

There is a massive amount of competition (for images) on social media. The only way to beat these competitors is by creating images that stand out. This isn’t as hard as it sounds as there are several reports and case studies filled with statistics that show you what kinds of images perform well. If you follow this data you should be able to create images that will get you engagement and traffic.

To simplify this I have listed some of the most important statistics below, with tips on how you can use them to create better social media images.

When you post a group of photos together, Facebook only displays 4 in the feed. You can see 1 big image and 3 small ones. There is also a plus sign displayed on the last image that is followed by a number which shows you how many more photos are there in the album.

You can see it in action in the above post from the Marks and Spencer Facebook page. This format works because it generates curiosity and people begin clicking the photos to go through all of them. Therefore whenever possible make your single photo posts into a series and share them together.

They don’t have to always be photos of people or products as you can create an album containing several images with a series of tips. An example is the above photo album posted on the Social Media Examiner Facebook page. In a series of 4 images it shows you how to boost engagement with a photo gallery post.

This is a lot higher than a Tweet’s half life (24 minutes) and a Facebook post’s half life (90 minutes), but still shorter than a Pinterest pin’s (3.5 months).

You can take advantage of this lengthy lifespan by creating images and campaigns that stay relevant for a long time. For example if you were running a Tumblr contest you can keep it active for a few months instead of restricting it for weeks only. You can then create relevant images to promote it for that period. 3 to 4 months would be ideal as it takes 120 days for a post to get 84% of reblogs. You can do the same thing on Pinterest as the half life of a pin is 3.5 months.

Curalate analyzed over 500,000 images on Pinterest and found that reddish orange images receive 2 times more repins than images that are blue in color.

Therefore if you want more repins you should incorporate colors like red and orange into them. First experiment with red and orange separately and then try them together. You can also try using colors like brown and beige as they are shades and tints of orange.

As already discussed above, reddish orange images perform well on Pinterest. Hence if you want to use multiple dominant colors you need to find ones that go well with these colors. Again, brown and beige will be good options. Green will also do well as it goes well with red.

Using too many dominant colors in an image can make it look bad. So follow the suit rule i.e. you can use 60% of one color (jacket/blazer and pants), 30% of one (shirt) and 10% of another (tie). You can use this formula for anything from photos to illustrations and make them very visually appealing. If you want to use an extra color divide the 30% into 2 and use 15% of each.

Anyone who uses Pinterest knows that tall images do well on the network. You just have to visit your feed and you will notice that they get all the repins. But what you don’t know is that tall images with an aspect ratio between 2:3 and 4:5 get 60% more repins than very tall images.

Therefore keep this ratio in mind while designing tall images for your products, landing pages and blog posts.

6. Images with faces get fewer repins.

Images with faces get 23% less repins than those with faces.

This is why you should create and pin images that don’t have any faces in them. You can replace faces with things like products, illustrations, patterns, text, and colors.

The study also found that medium light images with less than 10% background get more repins.

7. Use the Mayfair filter most often.

TrackMaven analyzed the Instagram accounts of the Fortune 500 and found that the most popular filter used is #nofilter or normal. But the photos that received the most engagement were the ones with the Mayfair filter. Those without any filter received the second highest number of interactions and those with the Inkwell filter received the third highest.

The above graph shows the top 20 filters on Instagram.

Note: Don’t use a filter just because it is popular. Use it only if it brings out the best out of the image. You always have the no filter option and it is second best.

This is the exact opposite of Pinterest where reddish orange images generate more engagement than red.

9. Instagram images with one dominant color get more likes.

You can follow the suit rule again and create images composed of 60% blue and 2 or 3 other colors that compliment it (like brown and orange). You can use tints (lighter shades) of orange and brown to get the blue to stand out. Another option would be to only use several shades of blue. Adding neutral colors like gray, black and white can also help.

Instagram images with more background space get 29% more likes than those without.

Therefore when you take your photos or create your images, make sure that there is a lot of free space. This is actually a good thing as the lack of distractions makes the objects in the image the focal point.

The statistics in this post indicate that all social media different. For example images with more background do well on Instagram while those with less than 10% background perform well on Pinterest. Blue images do well on Instagram, while red on Pinterest. Therefore to get positive results with visual social media marketing you need to create unique images for each one. Don’t try to post the same image on all networks. And regularly stay up to date with visual social media statistics like the ones above.

Want to learn more about improving your content with great images? Download our free guide: “The Power Of Visual Storytelling.” 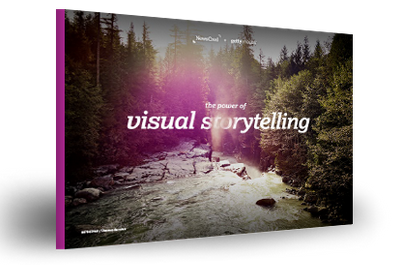 This article was written by Mitt Ray from Business2Community and was legally licensed through the NewsCred publisher network.

Strategy It’s Not About Length: SEO Content Trends to Stay Ahead of in 2020