Could your content strategy use a little Beyonce? [Case Study] - Insights
Industry Leaders

Could your content strategy use a little Beyonce? [Case Study]

Pepsi partnered with NewsCred to create a platform that would enable them to reach their customers in every corner of the world. Through Pepsi Pulse, their content management portal powered by NewsCred, Pepsi fans from Australia to Zambia can log in for the latest content on music, sports and entertainment. So when Pepsi has an exclusive announcement or event that they want to share with the world, they can break the news with just one click.

The biggest name in entertainment
Beyonce is a celebrity among celebrities—she seems to have the world in the palm of her hand and all of its inhabitants watching her every move. Which is why it was so surprising that she was able to secretly record a new album, along with 17 videos, and release it overnight without a single leak. Her fans exploded with excitement. What’s more impressive than that? In an unprecedented move, she did it all over again the following week. Working with Pepsi and NewsCred on a top secret assignment, Beyonce unveiled her 18th video, ‘Grown Woman’, exclusively on Pepsi.com. 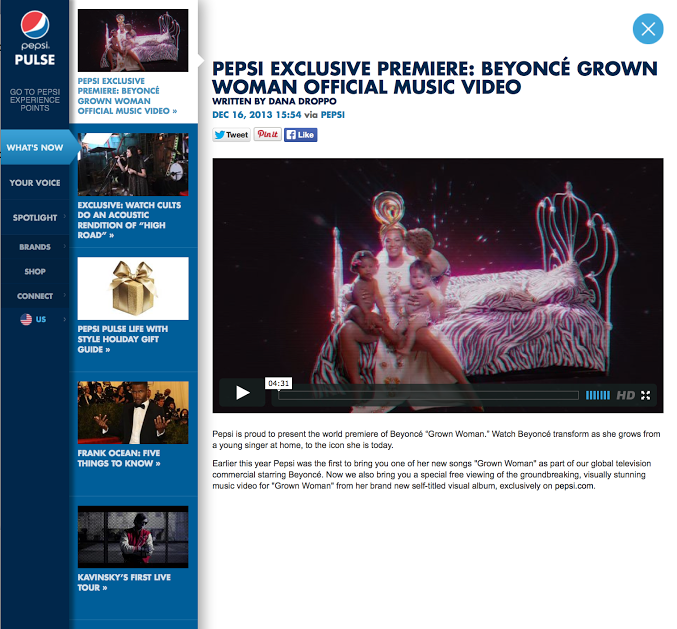 The world’s arena
Pepsi has an absolutely stellar lineup for their 2014 all-star soccer team. Rather than just posting a roster and directing their fans to check it out, Pepsi used the Pulse platform for an innovative roll call. Each player tweeted their fans to announce their involvement, directing them to Pepsi.com. Each player was a puzzle piece in a large team photo. Over the course of two hours, as each player made their announcement, their piece of the puzzle was added to the delight of their fans.

A flawless execution
Anyone who has launched a global marketing campaign can tell you that its not easy. NewsCred provided the Pepsi marketing team with all of the necessary tools to launch its Beyonce and #FutbolNow campaigns with one click and zero stress. Final assets, approved by the Pepsi management team, were uploaded into the Pepsi Pulse CMS, powered by NewsCred, With no margin for error, the marketing team was able to preview the video and its accompanying article, confirm that everything was perfect, and launch the premiere to every single market around the world. Beyonce and soccer fans, who are in no doubt Pepsi fans as well, rejoiced.