When it comes to fashion, sometimes you just need a makeover – small or large. ASOS gets that like no other brand. Over the past couple of years, ASOS has tried on one new look after the other across its various platforms in terms of content creation and marketing.

The results have been fabulous – currently at 8.2 million active customers (up 36% since the previous year), 30 million unique monthly visitors, millions of followers across social media and a 38% increase in international sales toward the end of last year.

The company’s understanding of the value of owning and investing in its own media channels has played a large role in its remarkable success, particularly in this age of brands as publishers. Let’s take a look at how ASOS uses content to boost sales and engagement.

Like all good fashionistas, ASOS has always played by its own rules. For example, seven years after its launch, the online retailer introduced a monthly print magazine. The move may have seemed totally incongruous with the company’s digital presence, but was actually key in turning the brand into a household name.

The magazine – high-quality, glossy content that raises ASOS up as a serious fashion destination – has a readership of 450,000 in the UK and is also available online with 100,000 monthly readers as well as via a free mobile app. Print readers end up spending more time on the site while the digital version enables users to click and buy as they browse, making it all the easier to shop.

Take a few minutes to brainstorm. Is there an opportunity to bring in a seemingly old-fashioned element to your content marketing? It may prove to be more cutting edge – and more profitable – than you think.

Having earned a Media Lion in Cannes, ASOS registered its highest ROI ever in the UK and drove £5 million worth of sales. The brand’s #BestNightEver global digital promotion may just as well be known as the #BestCampaignEver. Three starlets were chosen as the spotlight of the Christmas 2012 rollout – Ellie Goulding, Azealia Banks and model Charlotte Free.

Each celeb used her own personal social media presence to push the campaign’s extensive content, thereby exposing the ASOS message to millions of more viewers, with enticing elements like the chance to win clothing that the ladies wore throughout. Non-winners were still able to snag the looks with ease, thanks to shoppable videos – perhaps the coolest and most innovative element of the campaign.

Charlotte’s video garnered a cool 614,149 views on YouTube. Is there some creative way for you to expand your sales strategy via clickable videos or a similar tactic?

Last year, ASOS starting using Twitter to experiment with a series of live, lo-fi games to get their 20-somethings engaged in a dialogue and excited about their products and value – and the chance to win prizes. Not your average way to use the platform, but one that proved to be immensely fruitful.

The games worked to build buzz around upcoming sales and led to an unprecedented jump in user numbers and engagement. During the four hours that the games took place, 15,000 people participated, many tweeting 5-10 times throughout for a grand total of over 120 million contributions. What’s more, every round of games resulted in a 133% increase in Twitter followers and a 774% increase in hourly sales attributable to Twitter.

That’s a huge jump in engagement, and a lot of reasons to start thinking about using Twitter and other social media networks in new, innovative ways.

Not to be forgotten, the brand’s Pinterest page was also swept up into the makeover whirlwind. Back in July 2012, ASOS had 7,735 followers on the visual social network. That number is now up to just over 67,000.

What did they do differently? Each board now has ASOS in its title, which helps boost search traffic to the page. Pins are no longer mostly links to other blogs and articles, with the majority now leading directly back to the online shop. ASOS maintains a good mix of content, with 28 boards featuring anywhere from 20-420 pins that are fun, engaging and totally repinnable.

The redesign of the ASOS homepages has to be the biggest news in its recent history. The online fashion retailer’s new look is as bold as it is beautiful, and it packs a serious content punch. Gone is the traditional digital shop landing page, with its sidebar of various clothing essentials and highlighted free shipping features.

Men’s and women’s homepages have been completely re-outfitted, with a strong emphasis on original content, specifically catered to each gender’s online shopping tendencies. Given the female proclivity to browse for inspiration and entertainment, the site now features “This Just Happened,” a running blog feed with style and celebrity news, while products and styles are editorially framed, creating a shopping narrative. The men’s page is decidedly simpler and more to-the-point. 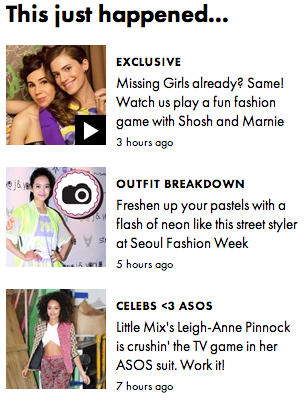 The content overhaul, as well as a improvements to overall customer experience in terms of better delivery, added payment and premier service options, have all led to a significant increase in sales – a jump of 37% to £133.7million in the UK.

When ASOS decides to go for something, they go all the way, which is clear when we look at the scope and variety of their content. Their goal is to become the number one online fashion destination for 20-somethings, and at number two, they’re not too far away. With one remarkable content marketing campaign after the other, it’ll definitely be fun to watch them rise to the top.