What Content Marketers Can Learn from a 19th Century Explorer

In the spring of the year 1800, Alexander von Humboldt found himself far from home on the sandy banks of the Orinoco River in the northern reaches of South America. Humboldt was tired, plagued by mosquitoes, and had already twice come close to death – first when he almost walked into a jaguar while searching for plant specimen, and again after he accidentally spilled on himself the Amazon dart poison he had been carrying in a glass container.

Despite these dangers, the heat, and the unrelenting clouds of mosquitos, Humboldt was as happy as could be. The land he was now traveling through was largely uncharted. Not a day had passed without new measurements to take, observations to log, and botanic samples to collect.

Humboldt’s guides would have been forgiven for gawking at their employer, a man who, when their canoe flooded, seemed more concerned with the safety of his tools and notebooks than the fact that he himself was half-submerged in crocodile-infested water.

As he lay in his hammock that night, listening to the noises of the jungle, Humboldt reflected on his life and his journey from Europe. Although he had already had the adventure of a lifetime, he worried about his return. First among these fears was the prospect of returning empty-handed, with nothing to contribute to the scientific community, after expending so much time, money, and effort.

Fortunately for Humboldt, he never realized this fear. When he returned home, he carried with him more than 2,000 plant species that, at the time, were previously unknown to European botanists. These specimen, combined with countless measurements, notes, drawings, and data points, now gave Humboldt the material he needed to develop his theories on nature. He had survived the jungle. Now, how would he fare in the lecture halls of Paris, London, and Berlin?

You may be wondering what any of this has to do with content marketing.

Adventures with crocodiles and jaguars make for incredible stories – but what are the takeaways here? What can today’s content marketers learn from Humboldt and his obsession with nature? Quite a bit, I realized, while reading Andrea Wulf’s “The Invention of Nature,” about Humboldt’s fascinating life. 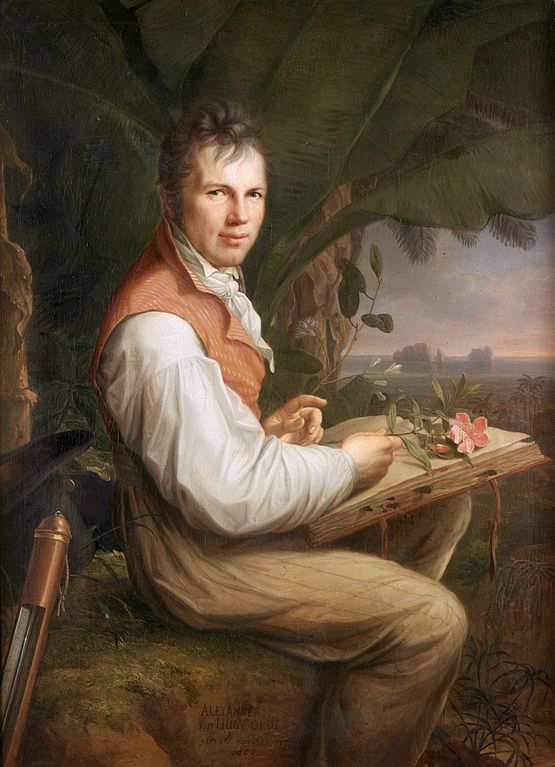 Once back in Paris, Humboldt wasted no time in sharing tales of his time spent in South America with whomever was willing to listen.

Humboldt’s distribution strategy was twofold. First, he regularly published his findings in various formats, ranging from short articles to multi-volume sets, to high-quality (and costly) picture books made up of sketches that he and his partner, Aime Bonpland, had made during their travels. Due to the images’ beauty and high level of detail, both scientists and artists alike, along with the average person, marveled at the work Humboldt and his partner put forth.

Humboldt’s second key distribution channel was lectures. The volume of these talks, along with their quality, was impressive. While in Paris, Humboldt was a flurry of activity. Instead of running around on his hands and knees scooping up bugs and flowers as he had in the Amazon, Humboldt now dashed back and forth between packed lecture halls, speaking to eager crowds about everything from altitude’s effect on air pressure, to the Mayan alphabet, to the movement of currents off the Chilean coast. There seemed to be no subject Humboldt was not an expert on. And perhaps best of all, he almost never charged an entry fee for his lectures.

When night came, dinner parties replaced the formal lectures. Ironically, these parties often took on a lecture-like quality if Humboldt was in attendance – due to the fact that when he was speaking, guests would inevitably gather around him to listen. He was passionate, knowledgeable, and always willing to engage with anyone interested in hearing what he had to say.

Takeaway for marketers: Humboldt enjoyed none of the technological advantages available to modern day marketers. And yet, by combining his energy, passion, and high-quality, engaging content with a multi-channel distribution strategy, he was able to spread his teachings quickly throughout Europe’s capitals. By implementing a diverse, “always-on” approach when it comes to content distribution, today’s marketers should be able to achieve some of the successes that Humboldt enjoyed.

Humboldt’s lectures, already unique to begin with, were made even more novel by a feature absent from many other lectures: the presence of women. At a time when women were not permitted to attend university in most European countries, Humboldt continually encouraged them to join and participate in his lectures. By fostering this trend, Humboldt was able to reach an entirely new audience that scientists and academics had previously shunned.

This new audience, eager to participate in the discussions, in turn embraced, challenged, and ultimately advanced Humboldt’s theories.

Takeaway for marketers: Marketers would do well to remember that brand champions may exist outside of your target audience. As Humboldt proved, a previously neglected audience, once earnestly engaged, can be just as loyal as your established audience, if not more so.

Humboldt’s success in communicating his theories to a wide audience was due in large part to the way he chose to present the information.

Rejecting the data charts and rigid classification tables that were common at the time, Humboldt used images and graphics to capture information. Presented in easily digestible, non-scientific formats, Humbolt’s infographics were able to capture the attention of diverse audiences, and ultimately enabled him to explain complex natural systems and better tell his stories. The graphics made it easy for Humboldt to compare and contrast elements and regions of the natural world, rather than the more common style of studying the phenomena in isolation.

A good example of a Humboldt infographic is his famous “Naturgemalde” (nature painting). It depicts a cross section of a South American volcano, complete with the different plant life found at varying altitudes. Figures on correlating temperatures, rainfall, and air pressure can be found along the borders. Here, we can see Humboldt’s ability to blend hundreds of data points and measurements to form a simple and digestible big picture where viewers can draw their own trends and insights. 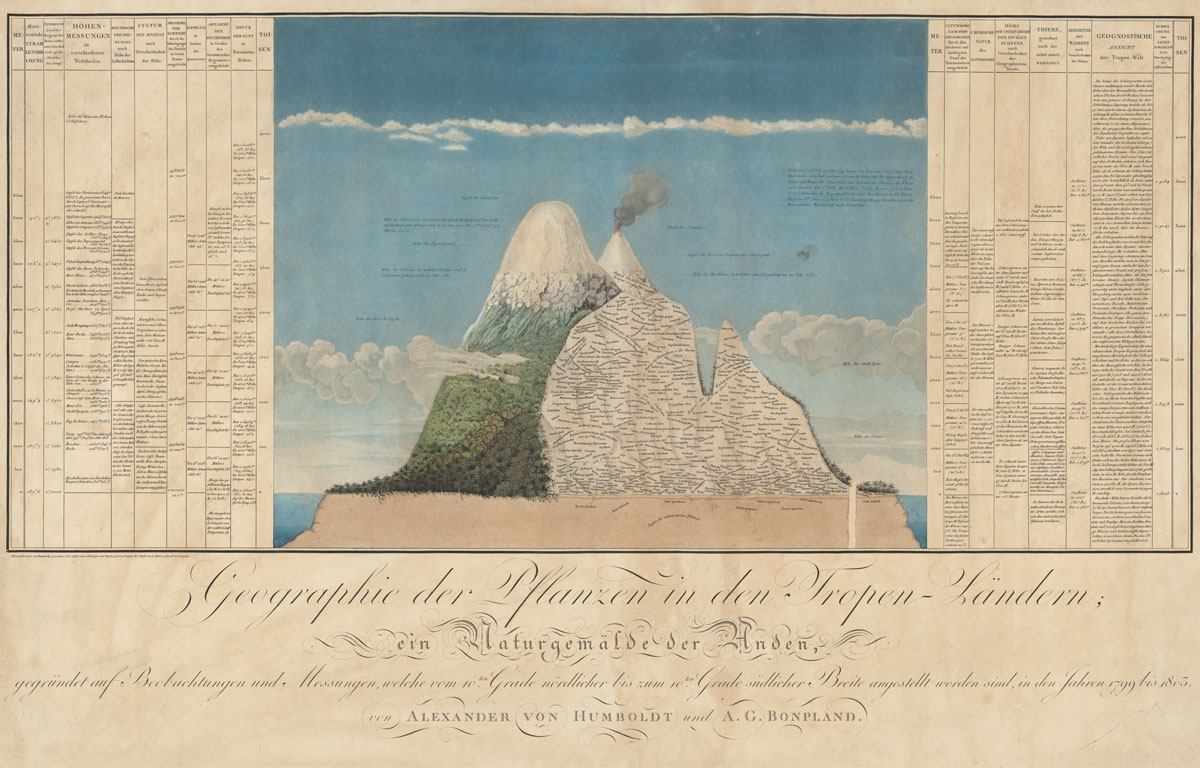 The next image is one of the earliest depictions of what are called “isotherms,” bands of similar temperature that run across the globe. Humboldt coined the term when he published the first isothermal map while living in Paris. 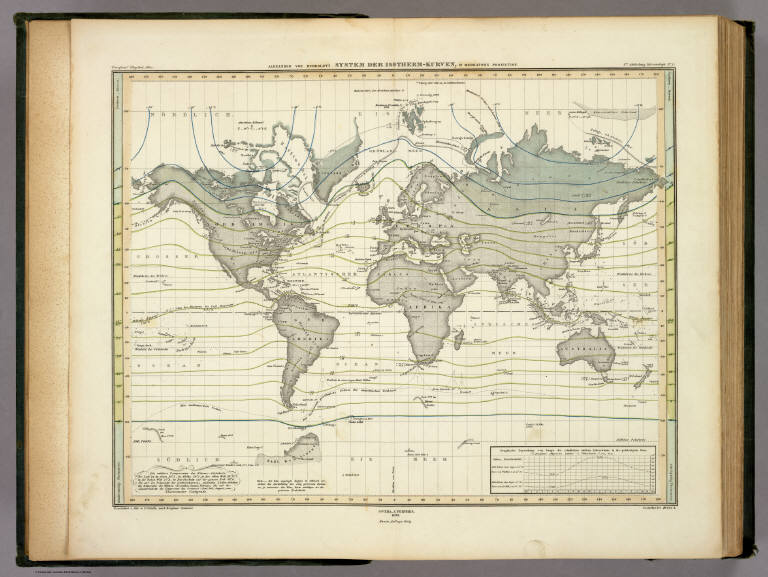 Again, Humboldt gives us a large amount of information, cleanly composed into a simple visual that allows the viewer to much more easily notice trends and patterns by comparative study.

Takeaway for marketers: Creating visual content to convey information is a tactic that all marketers should utilize as part of their engagement strategies. At a time when attention spans are increasingly short, the ability to quickly and easily communicate complicated information is extremely valuable.

Although he was first and foremost a scientist concerned with recording and analyzing the natural world, Humboldt never limited his observations to plants and animals, alone. Throughout his travels in the Americas, Humboldt filled his log books with notes on the societal, political, and economic conditions he encountered. When Humboldt visited some copper mines in Mexico, he focused extensively on the geological features of the mines, taking measurements on temperature and air pressure, as well as noting the makeup of the soil and the types of rocks found in the tunnels. However, Humboldt devoted equal attention to the pitiful working conditions of the miners, themselves. An ardent abolitionist and advocator for workers’ rights, experiences like this left a strong impression on Humboldt. He often used his fame as a platform to argue for causes he believed in.

His most prominent work in this area was his book titled, “Political Essay on the Kingdom of New Spain,” in which he comments extensively on the predatory treatment of the indigenous South American population at the hands of the Spanish.

Though his anti-colonial and abolitionist views may have gained him fans, his stances ultimately cost him dearly in another way. The British government continually denied him a visa to travel to colonial India to undertake a second set of studies in the Himalaya.

Takeaway for marketers: Now more than ever, it appears brands have begun to embrace the practice of taking stands on social issues well outside their industries. There are many factors to consider before a company aligns itself with a particular cause. And while there will inevitably be detractors, the result can lead to a more loyal customer base and good PR.

Humboldt had a lot to teach the world about itself. He was wildly intelligent, with seemingly boundless energy. Whether it was his theories or values, he was seldom willing to compromise. From Darwin to Thoreau, and from the leading minds of scientific academia to women who had never been permitted to attend a college class, Humboldt was an inspiration and a hero.

With his books, images, articles, endless speaking events, and informal lectures, he was perhaps, for a time, the world’s greatest content marketer: an example of what could be achieved with passion, purpose, and a willingness to take the time and spend the energy to build a massive, diverse audience – and ultimately, to continue engaging with it.

Chet Darrow is a Legal and Business Operations Associate at NewsCred.